Have you ever been stuck in an elevator? It happened to me and here’s my story.

After several hours of sipping and socializing, we decide to call it a night. Midnight is a few minutes away when Mike, Heather and I leave the party. This Saturday evening began with cocktails at our friend Scott’s apartment, followed by a fête in an Upper East Side townhouse. It’s just another Saturday night out in New York.

The elevator doors are open with two gentlemen waiting for us to join them in the tiny three by three cab. The limit is six people, but we’re like sardines at five. I close the antiquated iron gates and begin to giggle. As the elevator moves, I realize that Andrew, the bartender, is the only sober one of the bunch.

We continue to make small talk when in a New York minute the elevator comes to a screeching halt. The cab rattles and thrusts into what feels like a parked position with the emergency brake on high. What’s happening? Are we stuck in the elevator? Dangling between floors?

We wait for a moment. Tamir, a local real estate agent, presses the buttons. “Open” doesn’t work. None of the buttons work.

“Oh my God. We’re stuck in the middle of two floors,” I say. I feel a warm flush come over me as I remove my vintage fur stole.

Meanwhile, Tamir continues to press the elevator buttons and nothing changes. After about five minutes, Mike pushes the red emergency button and we hear a voice.

“Hello?” Tamir takes control. “We’re trapped in an elevator at Fifth Avenue and East 82nd Street. There are five of us in here, and it’s about three by three. Can someone come and get us out?”

Apparently, the elevator dispatcher is located in Texas.

“TEXAS!” I raise my voice. “What the hell are they doing in Texas? And what’s that burning smell? Is there a fire somewhere?”

Heather tries to remain calm, like the rest of us but voices her concern over the fumes.

Tamir sets us straight. “That odor is nothing, just burned rubber from the emergency brake. When I was in the Israeli Army, we would sit for days in bunkers with thick black smoke. Don’t be a wussy. You are stronger than you know.”

We should feel better after that comment, but we don’t. The horrible odor is getting thicker as the clock ticks on, and it’s getting tougher to breathe. At this point, we’ve been stranded for about 10 minutes.

My imagination begins to run wild. We have no way out of here. The elevator won’t move, and the doors won’t open. Then I stop for a moment. There is no way that we’re going up in flames. This isn’t our destiny. Heather and I are holding hands while the guys are acting like it’s no big deal. Of course, all I can think of is my teeny tiny bladder. “I’m so glad that I went to the bathroom right before we got in this damn elevator!”

“I’m not doing so hot in that department.” Heather had not used the loo before leaving the party. Her apartment is less than 10 minutes by taxi from 82nd and Fifth. She didn’t think it was necessary. Let this be a lesson for everyone. If your bladder is even half full, empty it.

I try to comfort her. “Oh babe, we’ll be out of here in no time. They have to be on their way,” I say. Not knowing who “they” are.

All the gentlemen begin to reassure us. At least this frightening experience proves that chivalry is not yet dead.

“My feet are killing me! These Fendi shoes are off.” I remove my six-inch stilettos, carefully place them in their shoe bag, and stand in bare feet instead. “Aaah, much better.” At least my feet didn’t hurt any longer.

As the minutes pass, we’re trying to keep our minds off the fact that we’re caught somewhere between the second and third floors in a 90-year-old elevator with the smell of smoke billowing into the car. Andrew reaches up and removes the access panel on the ceiling. It helps. It’s now a little easier to breathe.

Tamir is on the phone again calling the elevator company. It’s been twenty minutes, and nothing. Mike is on the phone with Pia, the hostess of the party. She assures us that someone is on the way. From where? Texas??? None of us can comprehend why there would be an emergency elevator contact in Texas when we are smack dab in the middle of New York City.

I can’t help but look at my watch every three minutes. Trying to make small talk, I ask Andrew, “Where do you live?” We continue to wait. It’s about 12:20.

“In Bed-Stuy. I got deported from London.”

We didn’t get the rest of that story.

Andrew has been stuck in a broken elevator before, he tells us. “I called 911, and they came right away. I think you’re supposed to call 911 if you’re trapped in an elevator. The fire department gets you out.”

Mike responds, “But this isn’t an emergency.”

I look at Heather. I’ve never seen this look of distress on her face before. I’m worried. The burning smell continues. It’s now getting hotter in the car too. If the rescue doesn’t arrive soon, it won’t be a pretty sight with five people standing in skivvies while fanning each other.

As we approach the 30-minute mark, we’re bitching and moaning about the fact that no one is here yet. We could be in danger. At this point, everyone at the party and in the building knows we’re stuck. We hear loads of chatter but can’t decipher any words.

Meanwhile, I realize something. When the elevator repair people arrive, they’ve got to fix the elevator before we can get out. This process could take time, even hours. We don’t have hours. Where is Dennis Leary when I need him?

My claustrophobic companions agree. This wait is too long. It’s late, but it’s a Saturday night, and this is Manhattan for God’s sake. It’s labeled The City That Never Sleeps for a reason. Where are the elevator repairmen – snoozing? In Texas?

My husband shakes his head as if to say, “You’re telling me? I’ve lived with her for 13 years.

“Yes, I’m at 82nd Street and Fifth Avenue in Manhattan. I’m trapped in a three by three elevator with four other people. We’ve been in here for about 45 minutes, and there’s an awful burning smell. The elevator company hasn’t shown. Can someone get us out of here?”

“Did you say that you smell smoke ma’am?”

Minutes later, we begin to hear men’s voices. We detect activity through the tiny crack above us. It’s the FDNY. As they pry open the doors, I can now see their faces. Two burly firefighters stand on the third floor staring at us. “We’re here to get you out. Can you climb up?”

Getting rescued by a couple of handsome firemen may sound exciting, and I’d say that might be true under other circumstances, such as I’m NOT the one being rescued. But in this case, reeking of smoke as make-up drizzles down my face after being held hostage by an elevator for nearly an hour, well, that’s not exciting at all. Honestly, I feel a huge relief to get out, no matter how it ‘s happening.

I’m wearing a dress – a red cocktail dress to be exact. For the past 45 minutes, all I can think of is two men I’ve never seen before catching a glimpse of my bare fanny in a thong while climbing approximately eight feet up to the next floor in order to escape the elevator. But what choice do I have? None. I should be wearing tights like Heather. Let this be a lesson for all women. Don’t ever wear a thong with a dress, especially when there’s even a slim chance that you’ll ride in an elevator.

With two strange men below me, and the two firefighters plus people from neighboring apartments above me, I step up onto my husband’s back, still grasping my Fendi’s. My right arm reaches up about four or five feet to the next floor, and I place my shoe bag on the side, “Please be careful of the shoes. These are expensive, and I’ve only worn them twice.” The firefighters giggle and shake their heads. (I wasn’t trying to be funny.)On his hands and knees, Mike is ready to get me out. “Come on. Get on my back.”

Then all at once, I extend my arms up and jump in the sixth position (just like I’m back in dance class, with toes pointing and thighs together). The two brawny men hoist me the eight feet while grabbing my arms. My body rubs against the elevator as I make my way out. I skin my knee and dirty my cocktail dress, but I’m up and out in seconds. Whew!

Next, Heather, then the gentlemen, one by one escape the lift and land on the third floor. And, about an hour after this debacle began, we’re all safe.

The party is over. It’s been over. We thank the firemen, gather our belongings, and walk down the stairs. We reach the street, take a breath of fresh air and it feels good.

I’m still in bare feet, and I’m not cold at all. My Fendi shoes are in hand, and it’s time to go home. It’s just another night out in New York.

I would like to thank the gentlemen from Engine 22 / Ladder 13 / Battalion 10 in Yorkville for rescuing us!  And big thank you to all firefighters from the FDNY for their selfless work and dedication.

Special thanks to Heather Harrison Moran for contributing to this blog post. 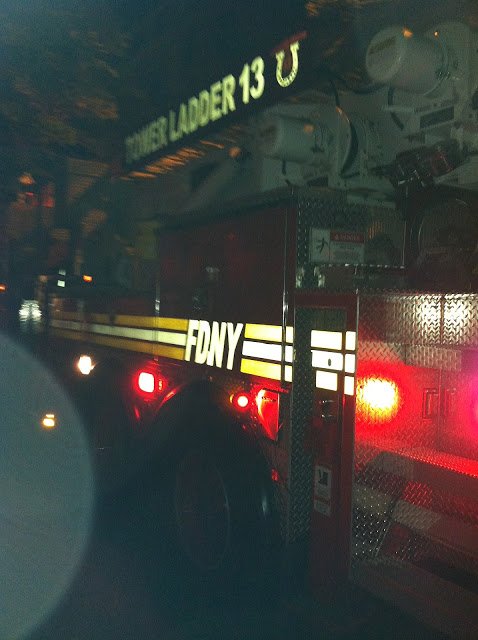 I’ve read horror stories about people stuck in elevators for hours or even days. I can’t imagine! The reality is, anyone who lives in New York rides elevators daily. It’s part of living in this great city. I don’t think twice about it, but I’ll never forget that night I was trapped. While the story is funny now when I look back on it, it was far from funny at the time. Have you ever been trapped in an elevator?

Also, apartment life includes noisy neighbors.  And if only I had a million dollars….