It’s mid-morning on Tuesday, and time for a coffee break.

When Scofield’s not writing, he spends time working as general counsel for Icebreaker Entertainment, a consumer products company founded by his wife, Christi Scofield. He lives with his wife on Manhattan’s Upper East Side.

TK: Can you explain the book’s title?

TS: “Eat what you kill” is a common compensation scheme both on Wall Street and in large law firms.  Basically, it means that employees are paid based on what they produce – very little or no compensation is guaranteed.  If one generates a lot of business for the firm, whether it be billable hours or commissions or consulting fees, he or she is paid handsomely for it. “The eat-what-you-kill system solely rewards individual efforts, with no recognition for anything beyond personal production.”  As a result, with regard to an employee’s income, “there can be no blaming anyone else.”

TK: Is any part of Eat What You Kill based on your life?

TS: Eat What You Kill is the story of a man I fear I could have been, under different circumstances. Many of the plot points are based on actual experiences; for example, the torment the protagonist suffers at the hands of his prep school classmates.  I was an observer, not a participant, but it obviously impacted me.  In that regard, Eat What You Kill is also a book of atonement. 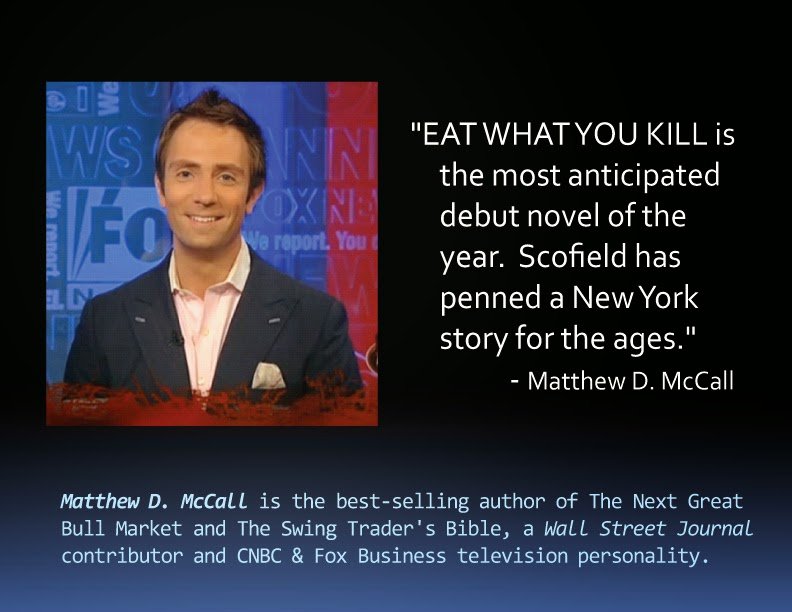 TK: As a long-time New Yorker, what’s your one word of advice for New York newcomers, particularly writers/authors?

TS: Don’t quit your day job!  But seriously, my number one piece of advice is to step outside your comfort zone and check out the things you couldn’t do or find wherever it is you came from.

TK: What’s the one thing you remember most about your first year in New York?

TS: Two things really stick out in my memory.  First, having been a frequent visitor to NYC all my life, I couldn’t believe I actually lived here.  Adding to the sense of awe was the location of my first office  — on the 40th floor of 30 Rock with a view south.

Second, I remember the sense of wonder and exploration that I still haven’t gotten over.  I spent the first year wandering around Manhattan.  Every neighborhood was a new world to be discovered. Today I still feel the same way about parts of the Bronx, Brooklyn and Queens.

TK: Uptown or downtown? Why?

TS: Both!  I live uptown and love the proximity to Central Park, and of course the level of safety and amenities we have on the Upper East Side are second to none.

The downtown neighborhoods have the history and, shall we say, more distinct personalities.  My favorite new beer bar, Proletariat, is on St. Mark’s Place near Avenue A, and my favorite restaurant is The Little Owl, on the corner of Grove and Bedford – talk about polar opposites!

TS: First, I must note that the question specifically says “cocktail,” so I won’t mention my fave spots for beer and wine.

In Tribeca, the Brandy Library
In the East Village, PDT
In the West Village, Little Branch
On the Upper East Side, the Penrose
On the Lower East Side, Freeman’s Alley
I could go on …..

TK: Any NYC-based projects coming up that you can share with us?

TS: I am writing the sequel to Eat What You Kill, and it starts off in NYC, so I’ve been scouting locations and seeking inspiration, from the Cloisters to Tompkins Square Park.

Read more about Ted Scofield on his website, and order Eat What You Kill through Amazon, available in hardcover, eBook, and audiobook starting today.

« Don’t Be Shy – Get Graphic this Spring
New York’s Best Bloody Marys; Midtown Resembles a Postcard, Portrait of a West Sider, and More; »