I don’t write about politics, and I don’t typically express my political views. I have friends and family whose values and beliefs are different from mine, and I aim to respect theirs even if I don’t agree with them. I hope they do the same. This post is not about one political party or one candidate. It’s about the bigger picture.

It’s been inspiring to watch so many people in this country become passionate, voice their opinions, and support a political candidate, no matter which side. But now it’s time to come together, put personal ideals and convictions aside and strive to be united.  I’ve observed all of the positive and negative comments, articles, and feedback on social media outlets like Facebook and Twitter for months now. Like others, I’m relieved that the big day is over, and I hope the badgering stops. I hope everyone will focus on the work to be done in this country, and in turn, they will support our president over the next four years.

Last night was a good night in New York City, and for more reasons than one. Although NYC is known for its large liberal population, election night was triumphant for other reasons, especially after what’s transpired over the past ten days.

I voted in the evening with my husband at the Church of St. Paul and St. Andrew at the corner of 86th Street and West End Avenue. We were escorted to the main area to hang out and wait. A young woman who was pastor of the congregation began speaking into the microphone and explaining the process. It all seemed complicated at first, but then we figured out the drill.
We waited in the crowded church for about thirty minutes before district “89” was called, and the remainder of the process took about thirty minutes –– pretty quick, all things considered. The church had refreshments and snacks like veggie chips, Chex Mix, cookies, and coffee, all at no charge. Some of the young volunteers were even taking orders and serving it to the older folks as we all sat in the pews patiently until our turn. I felt like I was living in Mayberry instead of Manhattan.

I knew it would be a record turnout, but I was shocked at the family turnout. The Upper West Side has a larger family population than other areas of Manhattan, as does the Upper East Side where I’ve also voted. But I honestly can’t recall any other visit to the polls in the past five-plus years of living here when I noticed parents with their children. From toddlers to teens, it was encouraging to witness young New Yorkers learning early that voting is not a right, but a privilege.

After days of sadness on the streets and despair ringing throughout the five boroughs, the energy changed last night. We had other matters to think about. Not to diminish the tragedy of Hurricane Sandy, but for the first time in more than a week, New York was focused on what at least seemed like a bigger picture. In times of crisis, I can’t imagine any other place pulling together like New York City. Thousands of people have suffered, lost loved ones, their homes, their belongings, and yet, they got out and voted. It doesn’t matter for whom they voted, it just matters that they did.

We walked to a neighborhood pub afterward to grab a bite and a few drinks to calm our rattled nerves while watching and waiting for the results. The bar became more and more crowded as the night went on, with people coming and going, staring and cheering at the five televisions. It felt wonderful to be an American after such a long and sometimes ugly race to the finish line. It also felt wonderful to be a New Yorker and living in a place that really is about the people.

As I walked the city in the late hour, the streets of the Upper West Side were asleep. I got home and stayed awake through the wee hours of the morning, not wanting to sleep, even though I knew the outcome of the election.

But today is a new day. It’s back to life as usual for many in New York City, but different for some. We resume the cleanup and strive to put the pieces back together in our great city after the devastation caused by Sandy. Another storm is approaching and we hope it will spare us this go-around. Some evacuations are in place, and NYC parks and beaches are closed again. It’s already begun to rain, the wind is picking up, and the weather will worsen in the next eight hours. Whatever this Nor’easter brings us, we will go on. We are on our way back and last night was the first victory. 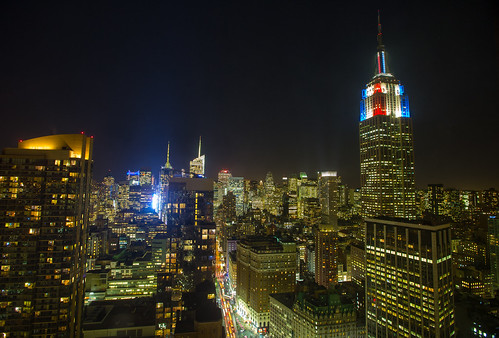