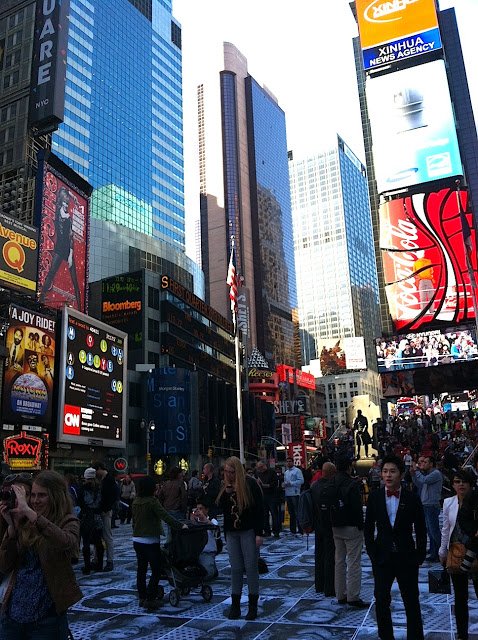 In the wake of all the positive buzz surrounding my current project, Showgirls! the Musical! an acquaintance texted me, “I am so jealous of your overnight success!” What is success anyway? Money? Happiness? Fame? An actor profile on Broadwayworld.com? One hit show? To each his own. The only thing successful people have in common is that they all worked really hard to get where they are.

Yes, there is that one in a million situation where some guy gets picked up in a coffee shop to star in a feature film because he happened to have the right look in the right place at the right time. Or there’s the girl who just graduated college and goes right into a Broadway show because she was discovered by an agent in her expensive college’s showcase. But for the 99 percent, that is not a reality.
In response to that text message and to all the people who think that stars get lucky and are born overnight, I would like to give you a deep look into my “overnight success.”

Knowing what I wanted to do from just moments out of the womb, I started performing in community theater at the age of nine, balancing rehearsals with my school work. I went on to perform in every middle school and high school production, and eventually became president of the drama club my senior year.
Summers were spent training at the intensive theater camp, Stagedoor Manor, (on which the movie Camp was based), singing alongside the likes of Lea Michele and the daughters of Richard Dreyfuss and Ron Silver.
For college, I attended NYU’s Lee Strasberg Institute, but realized that Tai Chi and collective singing classes were not pushing me hard enough in the right direction.

After a summer training at the Circle in the Square Theater School, a five day a week 9-5 program, I transferred to SUNY Cortland. There, I had six dance classes a week, starred in the musicals, and learned how to do ballet on pointe for their annual production of The Nutcracker.
After graduating a semester early, I was excited to delve into the big city and get my glamorous career under way. The following sums up the past decade:
I toured the country on six different occasions, sometimes sleeping four people to a hotel room, (thus sharing a bed), or being housed with conditions such as rodents, rodent feces, infestations of every insect imaginable, and no heat or hot water.
I’ve gotten ready for performances in middle America in mirrorless dressing rooms in elementary school boiler closets.
I lived in Alaska doing a can-can musical four times a day, spending four months in a tiny town that cruise ship patrons grew bored with after only a couple of hours.
I performed at a theme park, swinging fourteen tracks in six different productions, seven shows a day, six days a week. These tracks included a full bodied costume character worn under the hot sun in a melting ice vest, and throwing tiki torches as an African tribal dancer on a dangerous concrete floor. I threw my back out, lived off painkillers and monster energy drinks, lost eight pounds, and kept on going through the pain. I felt like a robot. I thought, maybe I don’t love this anymore. I wondered why I was still doing it.
Then, as a reminder of my love for the stage, I got to live my ultimate dream: Playing Maureen in a professional production of Rent. I greeted fans at the stage door, got carted around by limousines, was shown off like a trophy at publicity events, and gave television news interviews, all while living in a South Carolina beach house. But when it was over, I had to deal with the reality of coming home and going back to being nobody.
I finally made it to Off-Broadway in New York City, doing two different shows at once, culminating in five performances per weekend! Had I made it now? I would arrive at the theater at 9:30 a.m. every Saturday morning (so no late partying on Friday nights!), build the set, perform the show, take down the set, sign autographs for children, travel across town (sans lunch) to the next theater, build that set, do two performances of that show, take the set down, repeat the entire process the next day, and then go to work and waitress all night, as the two shows together still didn’t pay my rent. I would get home from work at 2 a.m. and wake up at 6 a.m. for auditions.
I performed the starring role in an opening night of a world premiere musical in Connecticut under the following conditions: Coxsackie, tonsillitis, AND a chest cold.
I endured totalitarian dictator directors who lived to make me cry and berated me in front of family and colleagues so they could feel powerful.
I’ve had my heart broken moments before performances, wiped the tears away (Katy Perry style) slapped on that smile and given the performance of a lifetime anyway.
I have avoided relationships because I just don’t have time.
I have held costumes together with safety pins and fashioned microphone belts out of pantyhose.
I have played a monkey, an elf, a goose, a clown, a grandma, a cupcake fairy and a tree.
I take lessons with a voice teacher and an auditions coach who help me prepare for up to eight auditions in a single week.
I spend my evenings on online casting sites, writing personalized cover letters for every job I am qualified for, in order to score more auditions.
I have spent thousands of dollars on headshots, demo reels, and workshops with casting directors and agents.
I spend my last dollar making sure I see all the NYC theater I can, so I know what is currently out there.
And SUDDENLY here I am starring in Showgirls! the Musical! which is taking NYC by storm and officially transferring to Off-Broadway in Midtown. Even if it closes in two months, I am enjoying the moment. I have no regrets about the things I have endured.  Every one of those experiences was a lesson and has made me stronger, more disciplined, and ready for whatever this business might throw at me next.
So, the next time you see a Broadway show and notice the star making her Broadway debut, know that she probably wasn’t just “discovered.” She’s been there the whole time. You just never noticed.