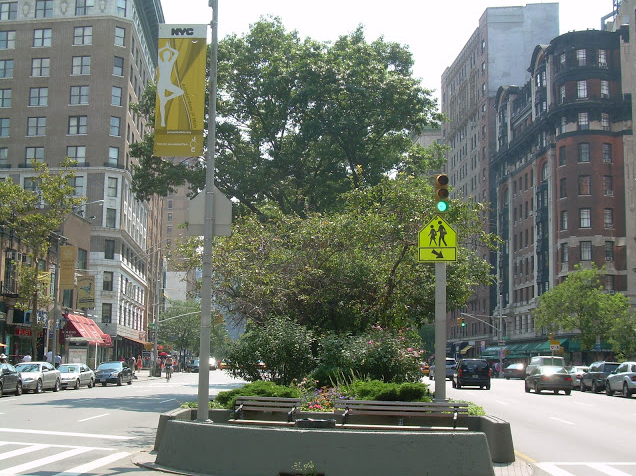 The Upper West Side is a charming New York City neighborhood with brownstones, prewar apartment buildings, tree-lined streets, and Central Park. I have everything I need for city living at its best, and still, it’s relatively quiet for Manhattan.

My pocket in the West End Historic District is far from exciting like other parts of the city, or even the rest of the Upper West, for that matter. So when a crime or the unexpected occurs, it’s worth mentioning.

Recently, I returned to my apartment at about 1 a.m. from an out-of-town wedding  As I exited the livery cab at the corner of 88th Street and West End Avenue, I detected movement out of the corner of my eye. Turning slightly, I saw a large furry creature digging like a rabid madman in the trash receptacle. Then I saw another! At first I thought I saw a couple of dogs, or perhaps large cats. But I was wrong.

In a split second, one leaped onto a tree, immediately followed by the other. These weren’t cats or dogs. One scurried up the tree trunk, while the other stopped, posed, and stared as I attempted to take photos to remember the moment. The masked beast looked at me as if to say, “Hello, welcome to my tree. I’m your new neighbor.” These animals were wild indeed. They were raccoons! Apparently, the unfriendly four-legged critters have found a home on the Upper West Side. Not sure what they’re thinking. Downtown is more suitable for the untamed.

Just a few nights before, the police captured another wild animal on 89th Street. This one was larger in size, also unfriendly, but with less fur––it was a totally naked man. Surrounded by the NYPD during the interrogation process, the forty-something handcuffed male stood unashamed and vulnerable with all parts exposed. It wasn’t even unusually warm that evening;  the heat wave had already passed.

What was his excuse? Perhaps he was heading back from a quick illegal dip in the Hudson and his swimming trunks floated off. Or, maybe he felt the need to make a statement about bottomless men since topless women are considered legal in Manhattan. The man in the buff didn’t seem drunk, mentally ill, or rabid. And the raccoons didn’t either.