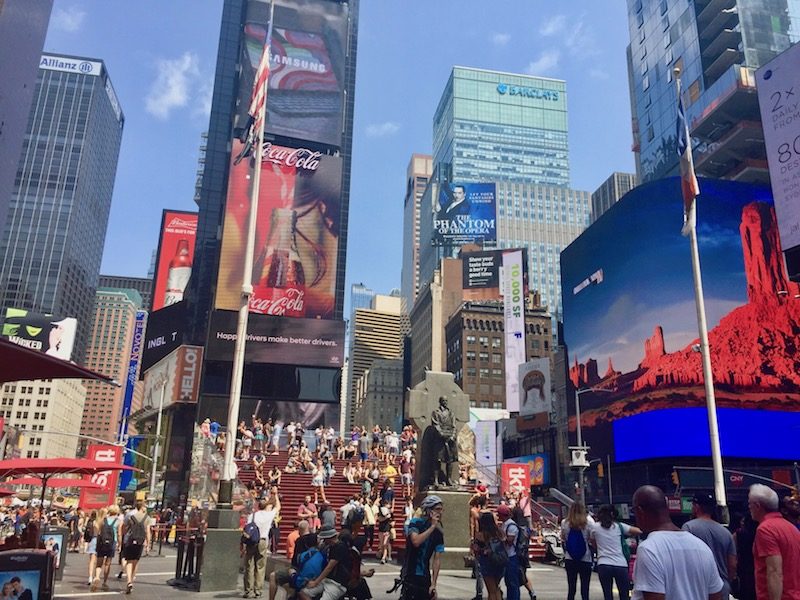 If you’re a Broadway fan, you’ve probably purchased tickets through TDF (the Theatre Development Fund), which runs the TKTS booths. The most frequented location has been TKTS Times Square, which is under the famed “red steps” in Father Duffy Square at 47th and Broadway. There’s also an outpost at the South Street Seaport, and one in Downtown Brooklyn. But in 2016, TDF planted a pop-up at Lincoln Center and it was a hit, so they decided to make a permanent booth in that location. The TKTs Lincoln Center is fantastic for different reasons….

It’s not in Times Square!

Okay, I realize that many tourists choose to stay in hotels in Times Square, so Lincoln Center isn’t the most convenient location in that case. That said, those tourists shop for their Broadway tickets at the 47th Street booth. But on the other hand, some tourists stay uptown. And I don’t know any New Yorker who likes to go to Times Square to buy tickets. Keeping that in mind, Lincoln Center is in a pleasant pocket of the Upper West Side with fewer crowds and less chaos than Times Square, and this newest location is useful for all of us who live north of Midtown. Having TKTS Lincoln Center means that if I want to see a Broadway show, I only need to walk through the hell that is Times Square twice – going to and from the show on the day or night of the performance. That works for me!

The TKTS  booth at Lincoln Center is inside.

Yep, that alone is huge. No more waiting outside in the frigid temps, pouring down rain, or sweltering heat.  (Or avoiding the discount tickets altogether because of New York’s crazy weather patterns.) Queuing in a temperature-controlled environment makes the waiting and discount ticket experience a whole lot more tolerable, if not enjoyable.

TKTS Lincoln Center is easy to get to.

Several subway lines are within walking distance. To get there, take the A, B, C, D, or 1 to Columbus Circle or the 1 to Lincoln Center. You can also ride the M11 or M104 buses. 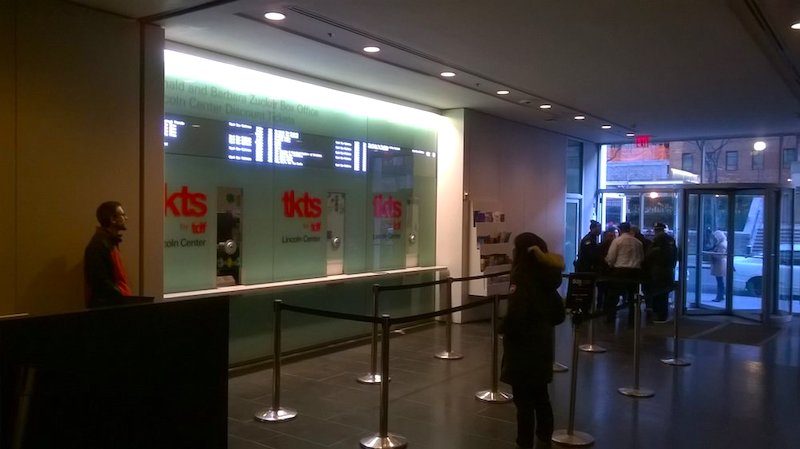 It probably won’t be as crowded.

The TKTS Lincoln Center probably won’t draw as many people as Times Square (the other locations aren’t as busy either). But when the weather isn’t great, know that the Lincoln Center booth will attract a bigger crowd, so factor in some wait time on rainy, frigid, and hot and humid days.

Have you purchased tickets from TKTS Lincoln Center? Tell us about your experience!

Thanks to TDF for celebrating 50 years of making the performing arts accessible to everyone.

A New York Times article from 1976 about the original TKTS, which opened in 1973!

Plus, other ways to score Broadway tickets. And a guide to Broadway theater etiquette.

« How to Spend A Day In Prospect Heights, Brooklyn
11 New York City Street Photos You Have to See »