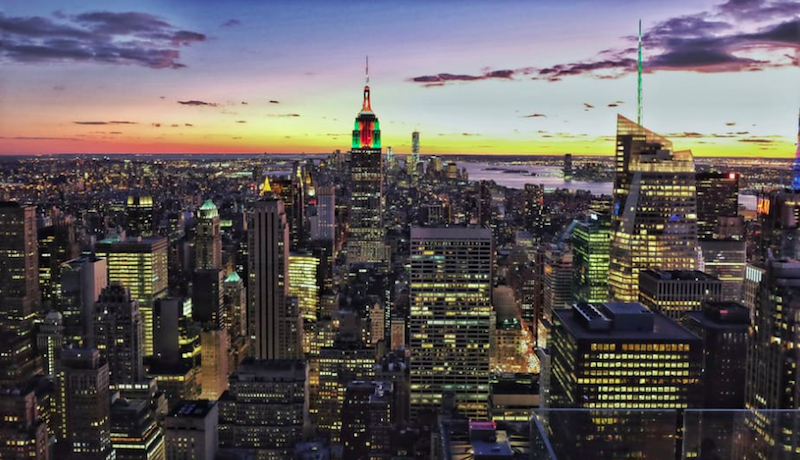 Fancy clubs and high-end restaurants in New York City aren’t everyone’s scene. I realize I’ve sacrificed a certain level of street cred for choosing Manhattan’s Upper East Side as my neighborhood, but I’m not a fan of anything too “bougie” and it’s not because I don’t like beautiful surroundings. I can’t deal with uppity, elitist attitudes from waiters or patrons. There are, however, a few upscale, unpretentious places to go out in NYC that I absolutely love, and they’re surprisingly laid-back.

The Pierre Hotel…. Open since 1930, the Pierre Hotel is one of the most elegant venues I’ve seen. The painted walls and ceilings look like a real-life version of the Beauty & the Beast ballroom, and I can’t say enough about the friendly staff. While everything at the Pierre – from its afternoon tea service to its guest rooms – is about as upscale as it gets, the people working there are nothing but warm and welcoming.

Morimoto…. Masaharu Morimoto was my favorite Iron Chef when I was a kid, so I couldn’t wait to go to his restaurant once I moved to NYC. As anyone would expect, the sushi is fantastic, and the clean lines of the interior are chic and modern. The wait staff is also very accommodating.

Hudson Terrace… Although I tend to stay on the east side of the city, I don’t mind venturing west for a night at Hudson Terrace. I’ve been a handful of times so far, and this hip spot has never disappointed. In the summers, the rooftop bar is the perfect place for wine tastings, and even when the roof is closed during the winter months, it’s still a great night club. The DJ always plays some of my favorite hip-hop tracks, and the view of the river is beautiful.

As a bonus, I’ve never had to pay for VIP service since they have so many club promoters. My friends and I have always ended up chatting to one of them outside until they escort us inside and seat us at our own table – complete with complimentary bottles of Grey Goose and glow sticks.

The Back Room… To be honest, I’ve been to this bar once and I’m not sure if I’d be able to find it again on my own. History buffs can appreciate this place, as it’s one of the only two operating speakeasies in NYC that was open during the prohibition era (hence, the inconspicuous entrance), but it’s definitely worth finding. While the cocktail list is a far cry from $4 well drinks, the atmosphere itself is very laid-back and effortlessly “cool.” Red velvet seating, chandeliers, and a wooden interior ooze a 1920s vibe, and drinks are served in teacups – think Downton Abbey meets Gangs of New York.

SixtyFive at the Rainbow Room… If I could choose (and afford) any place in New York to host a party, it would be the Rainbow Room. Located at the top of the Rock (aka 30 Rockefeller Center), the newly renovated bar has some of the best views I’ve seen in the city, and the restaurant boasts a lavish interior dripping in crystals. What’s interesting, however, is how the history of the Rainbow Room seems to overshadow its luxe factor. So while it may have been where people would go “just to be seen,” particularly during the World War II era, it now attracts a variety of clientele who appreciates its historical, social, and cultural significance. And most importantly, it’s one of the most unpretentious places to go out in NYC.

The Plaza Hotel… I’ve praised the Plaza before, and rightfully so. I could hang out at the champagne bar all day (no, seriously). With the Plaza being the most famous and iconic hotel in New York City, one might think it’s a bit stuffy. But I have no problem lounging back in its comfortable chairs and making myself at home. I wouldn’t go so far as to put my feet up on the tables, but trust me when I say it’s a very comfortable atmosphere. The Plaza is also a kid-friendly hotel, with their Eloise parties being popular amongst little girls, so the property has a certain element of lightheartedness that most luxury venues lack.

Do you have any unpretentious places to go out in NYC that you’d like to add to this list? Tell us in the comments.

« A Few Moments with Arlene Alda, Just Another Kid from the Bronx
Go Kitchensurfing: Hire a Personal New York Chef for Only $25 Per Person »