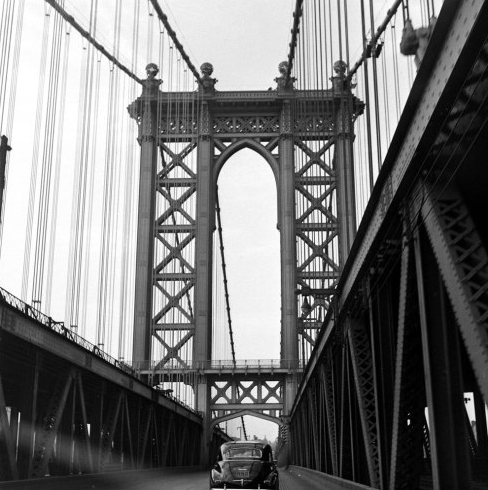 View of the Manhattan Bridge, connecting Brooklyn with that island across the East River, 1946–photo by Ed Clark—Time & Life Pictures/Getty Images

Our friends at LIFE.com reminded us recently that Brooklyn wasn’t always the trendsetting model and hipster hangout it is today. Long before the borough became New York’s new bohemia –– a foodie destination filled with au courant boutiques and seven-figure real estate prices –– Brooklyn was a town unto itself, a parcel with no pretense, a home base for the millions born and raised there.

Now, comprised of 2.5 million people, if Brooklyn were its own city, it would be the fourth most populous in the country, only behind the remainder of New York City, followed by Los Angeles, and Chicago.

While Brooklyn is associated with such American classics as the egg cream and Nathan’s Coney Island hot dog, it’s also given us the love-it-or-hate-it New York accent (fuhgeddaboudit!).

Brooklyn also boasts magnificent homes in enclaves like Brooklyn Heights and Clinton Hill, sand and surf in seaside communities like Manhattan Beach and Sea Gate, and though gentrified, Bed-Stuy remains a mecca for African-American culture.

Prospect Park is Central Park’s rival, and ethnic diversity is alive and well, particularly in neighborhoods like Borough Park, Flatbush, Midwood, and Bensonhurst. Most Brooklynites prefer living in the borough of Kings to any other in Empire City, including Manhattan.

Thanks to editor Ben Cosgrove, we’re featuring some of Ed Clark’s great photos of Brooklyn post World War II. These images capture the Brooklyn from the past when it was a simpler, less progressive time and place.

« An Afternoon with Daphne Rubin-Vega
Fashion Week Wrap-Up: Get Excited for Spring 2014 »