5 QUESTIONS FOR TRACY
by Stephanie Crocker

Today I’m back for another interview. Thanks, Tracy, for agreeing to do these Q & A sessions.  As you know, I find New York to be fascinating, as well as the people living in it. So, let’s chat again. Me, in my house in Nova Scotia. You, in your apartment on the Upper West Side.

In a place like NYC that’s so expensive to live, how does someone afford to dress so well?


That’s a great question! Well, you don’t have to spend a fortune to look good. That’s number one. You might have to dig into your inner creativity at times, but staying stylish is possible, even on a shoestring budget. With access to great bargain boutiques, sample sales, and discount retailers, we never run out of bargain shopping options in NYC. So we’re lucky as far as quantity and quality.


Even if you don’t live in NYC, many cities have stores like H&M, Zara, and Buffalo Exchange. Second-hand shops offer tons of possibilities for less cash.

But since living in NYC, I realized that even thrift stores contain a huge amount of upscale fashion. Although designer pieces will be more expensive than more run-of-the-mill clothing from say, Banana Republic or Ann Taylor, clothes will still retail for much less than if you shopped at Bergdorf’s or Barneys. It’s not uncommon to find pieces from designers like Dolce & Gabanna, Donna Karan, Miu Miu, and even Chanel in New York consignment shops. Crazy, but true. 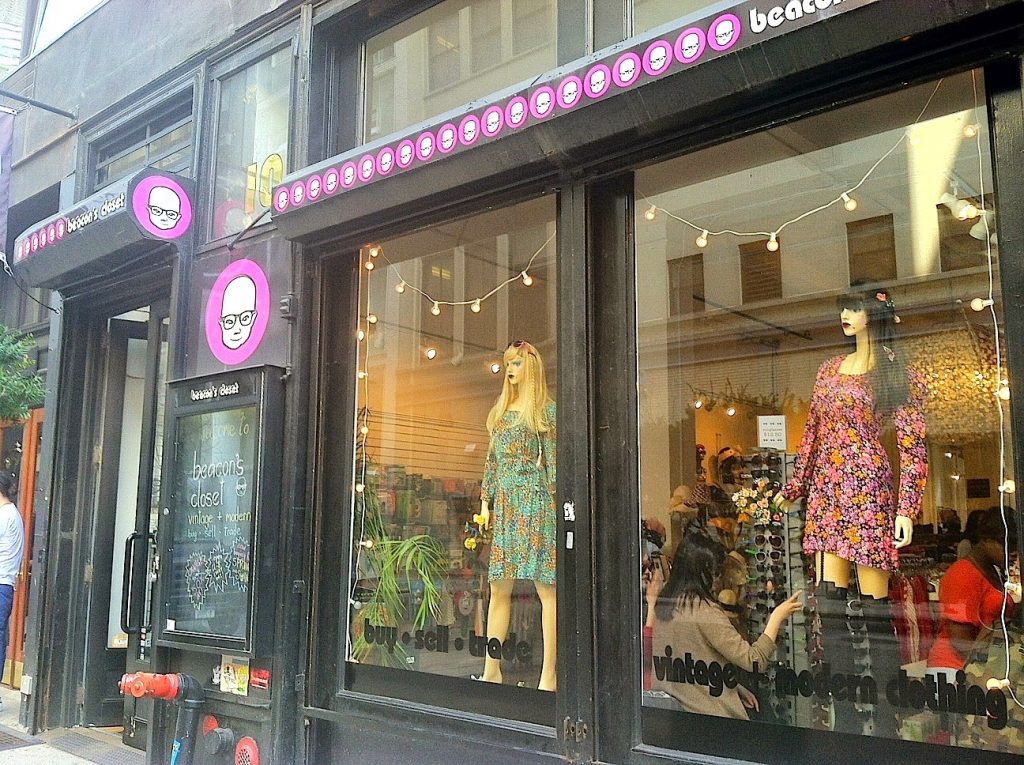 The majority of NYC residents live in small apartments. Your apartment is decorated beautifully, by the way. How do you decide what items to keep, and what to get rid of? Isn’t the cost of storage high?


Thank you! When I moved to NYC, I had to downsize from 2,800 square feet to less than 1,000, so it was tough to decide what to bring. Some things were just too large, so I gave them away or sold them. I picked out my favorite things like a 1940s writing desk that I bought at a flea market for $140, and a vintage glass lamp that I use in my dining area. I brought as much with me as I could, but I had to say goodbye to a lot of things. But, they’re just things, and I considered parting with those items to be part of the big plan of my new life in New York. So I was okay with it.

I stored a bunch of stuff in Pennsylvania at my mom’s, and unbelievably those items are still there! I hope to weed through everything later this year.


We do have a storage unit in our basement that we lease for $60 per month. Before that, however, we kept every belonging in our 825 square feet. Somehow we made space, but every nook and cranny was filled to the brim.

We usually clean out our closets about once per year, but honestly, we own much less than most people. If you don’t have the space, you can’t keep it. And chances are, if you get rid of some stuff, you probably won’t miss what you lose. If you have any doubts about an item, keep it for one more year, and then decide. 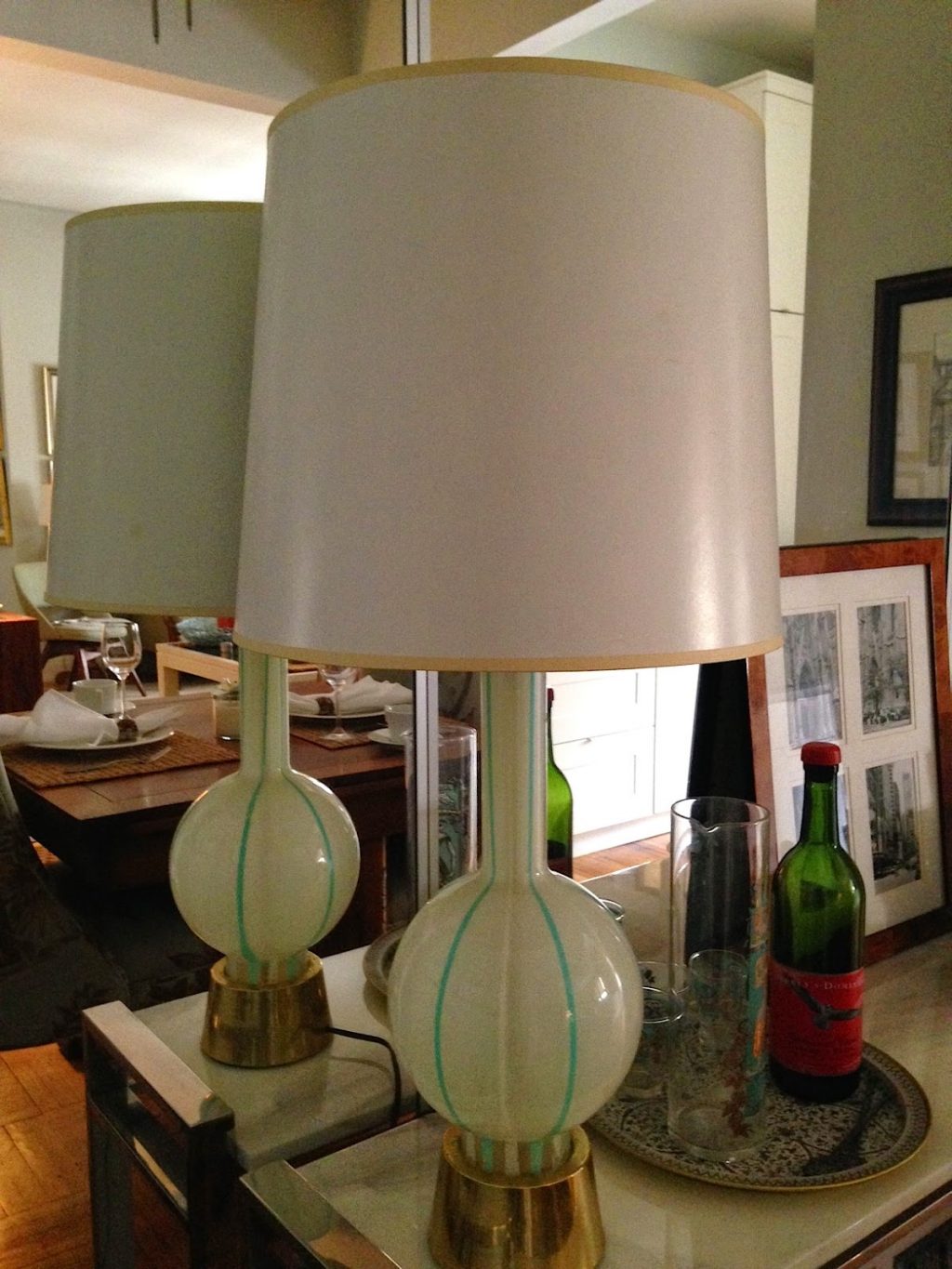 The winters in New York are very similar to Nova Scotia winters. What motivates you to brave the elements and get out there and walk, rather than just staying in? I would think that the beautiful parks would help motivate me.


Honestly, I despise extreme cold (single digits and sub-zero!), so I don’t go out unless I have to. I am not very brave when it comes to frigid winter weather! I do have to walk Bogey every day in the afternoon, so I have no choice but to suffer for about 30 minutes. And if I have an event or meeting, I run to the subway and stay underground as long as I can so I spend less time on the streets.

The wind in NYC can be brutal. In January and February, I spend more time indoors, and that’s okay. I tend to watch more movies, read a bit more, and spend more time cooking.

I do enjoy going to Central Park in the snow, but we’ve had some super freezing temps this year, and I haven’t been going to the park as often as I’d like. Hopefully, March will be a little warmer. 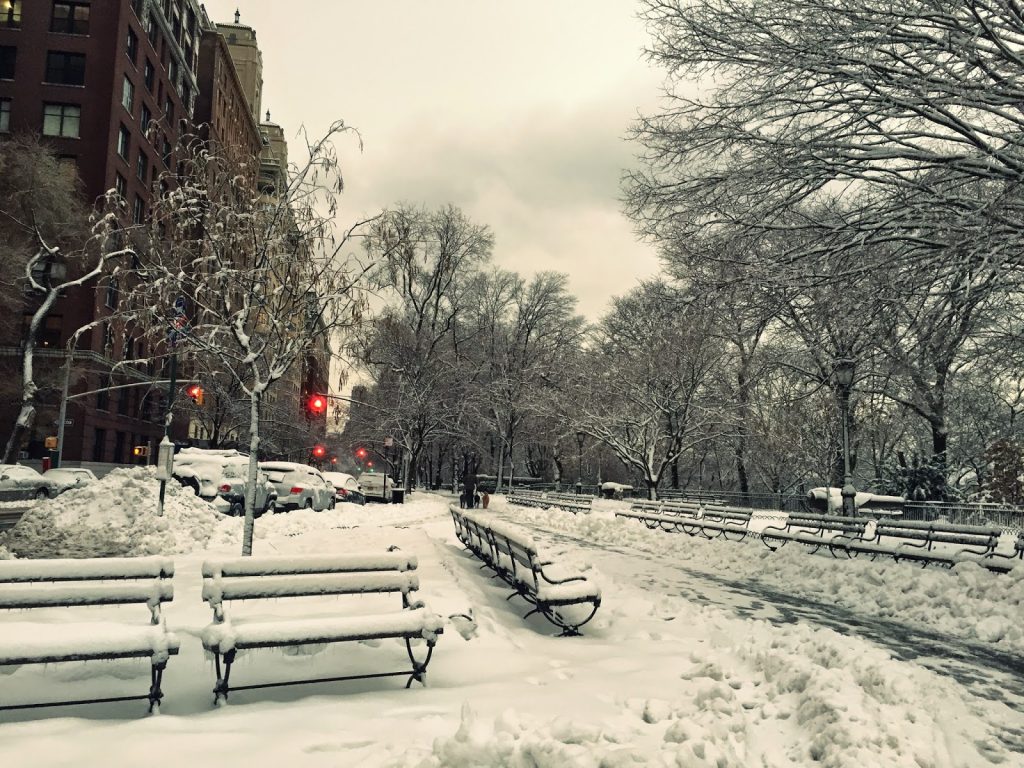 I remember sitting on top of a tour bus driving through Manhattan’s East Side. The guide pointed out where Katherine Hepburn and Bette Davis used to live. It was so beautiful there. You could reach out and touch the trees. If you could  visit old New York for one day, which period would you choose?


Definitely the early ’80s because that’s when I first started spending time in NYC. I’d love to go back to see some of the same people I knew at that time, and visit some of my old hangouts like Ballet Arts ‘Studio 61’ at Carnegie Hall, and The Ballet Shop near Lincoln Center. (Both have since closed.) I do love the new Lincoln Center, but it’s changed so much since then. It’s all ‘glammed up’ now.

I’d like to see the colors and textures of the city during the 1980s when the skyline was simpler, and the streets were shadier with more of an edge. That decade was a cool yet dangerous time, but for me, it was when I fell in love the city. 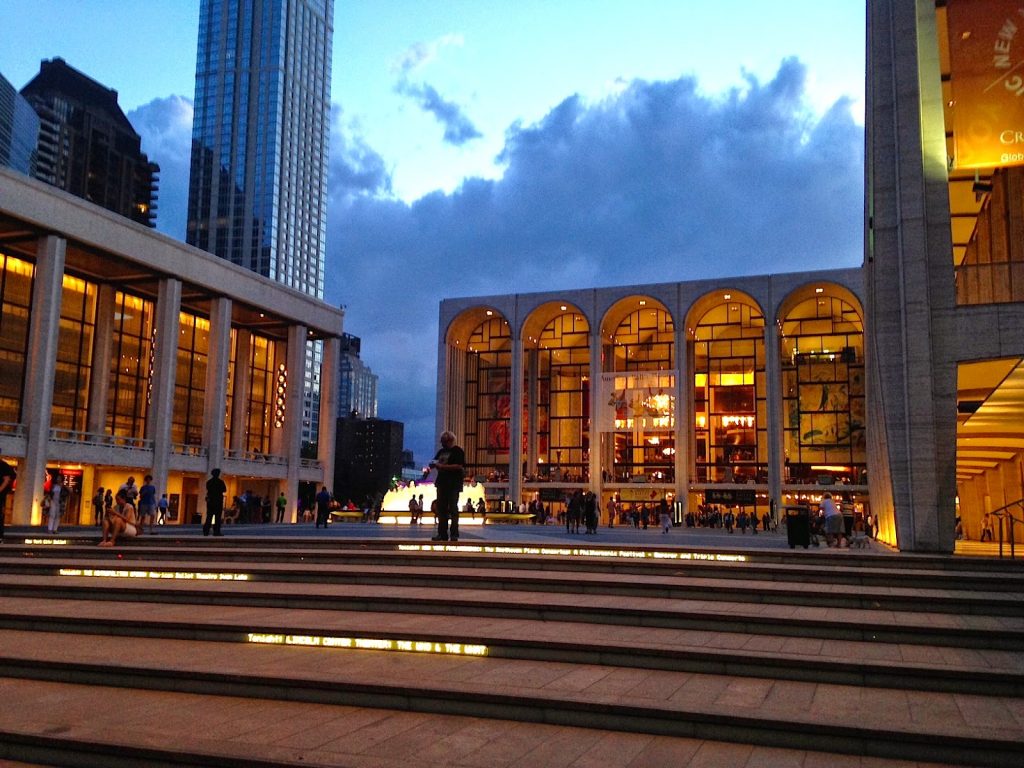 This last question is from follower Brandi Broxson in Naples, Florida.  What is it like having a dog in NYC?


Challenging! Especially if you own a large dog because you can’t just open the door to the backyard and let the dog. It’s no fun taking your dog outside when it feels like -10 degrees, or when it’s pouring down rain or icing over. I would say tolerating the bad weather is probably the biggest downside to owning a dog in NYC, at least for me. And Bogey needs to get walked. He can’t go around the block and do his business, unfortunately.

Transportation can be difficult since large dogs aren’t permitted on public transit unless they’re crated. So if you have to transport your dog and you don’t have a car, you have to find a taxi that will pick up a dog (some will, some won’t), or you get a car service that allows dogs. Typically, that’s what I do if I have to take Bogey somewhere. I have a car service near my apartment that welcomes pets. Bogey loves going places and riding in cars! 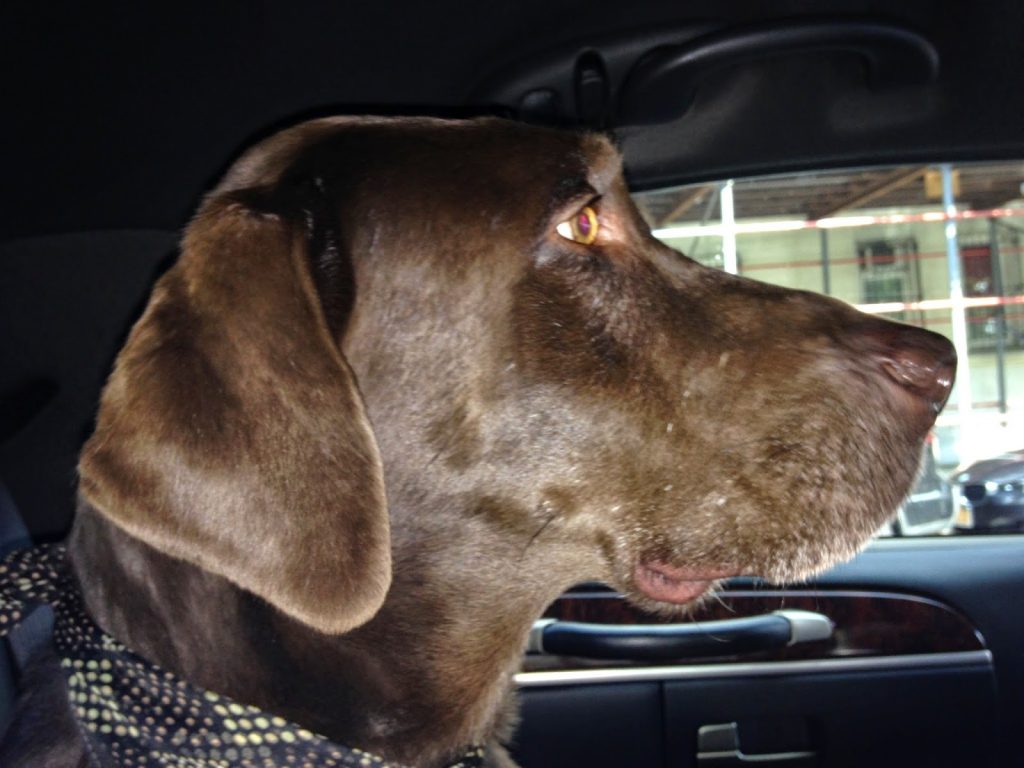 I wouldn’t let any of this discourage you if you want a dog or own a dog, and you’re thinking of moving here. Many New Yorkers own dogs and love dogs, so I consider Gotham to be a dog town.

Some people think that pooches shouldn’t live in the concrete jungle because they have awful lives, but it’s quite the opposite. Dogs have great lives in New York City. Yes, they live in smaller spaces, but they get walked multiple times per day which means more time with humans, and dogs are known to be companion animals and need that time.

Pups also have off-leash hours every day in city parks before 9 a.m. and after 9 p.m. Plus, they have their doggie friends in the neighborhood, and at the dog parks and doggie daycare. They look forward to seeing one another and sniffing butts.

And since owning a canine in NYC presents a few more challenges, than say, living in the suburbs, you know that a dog owner must really want a dog. Living with a four-legged friend in the Big Apple requires a higher level of commitment and more money because like everything else, pet food and accoutrements, as well as veterinary care cost more in here than in many other cities. But like other aspects of living in New York, you just figure it out. 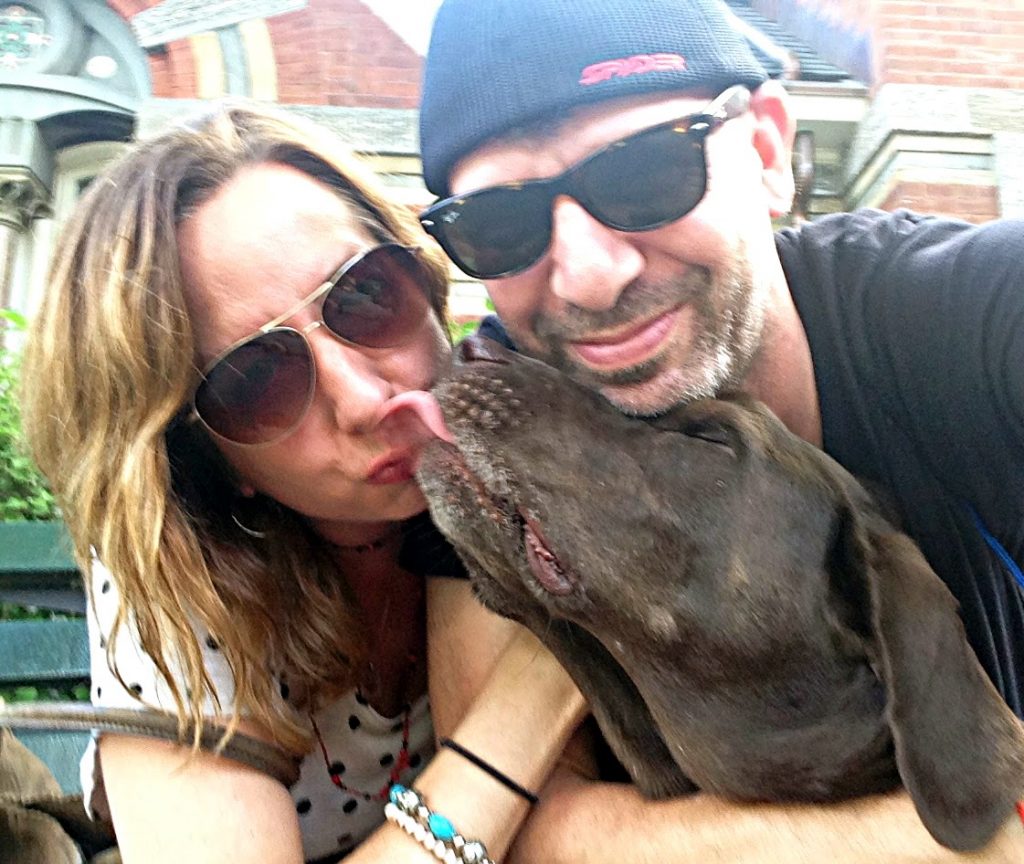 It’s always fun talking with you. I just wanted to say that Tracy’s New York Life is like an escape for me, seeing where I live in such a small town. I enjoy sitting at my computer with my coffee, reading and daydreaming of life in your amazing city. Thanks for sharing your stories!

Stephanie Crocker lives in Nova Scotia but is a New Yorker at heart. You can read her blog A Good Life at stephaniecrocker.com.


Have a question for Tracy? Send an email to tracysnewyorklife at gmail dot com.