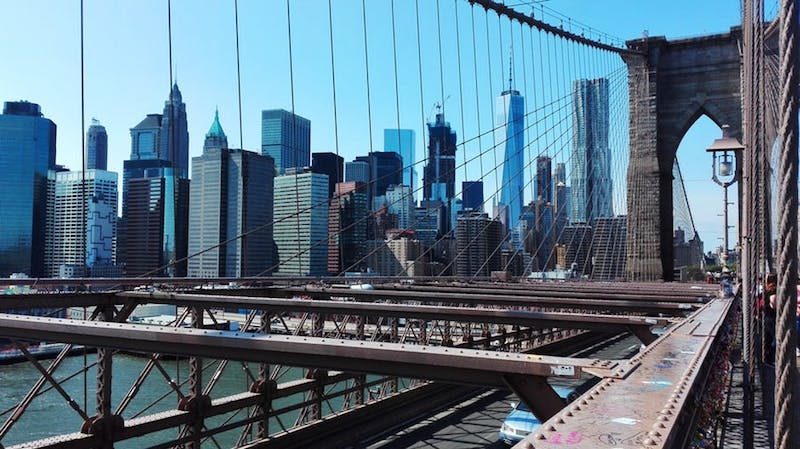 Walking across the Brooklyn Bridge – here’s what you need to know.

There’s no doubt about it – walking across the Brooklyn Bridge is one of the most quintessentially New York things to do, and most anyone who visits this city will eventually make the 1.3-mile trek. The story of the bridge alone makes this attraction a must-see at least once in your lifetime, and for many, a must-do more than once (some locals walk over it every single day!). If you’re considering the journey but don’t know the first thing about how, where, what, and why you should think about waking over the Brooklyn Bridge, hopefully, this blog post will clarify a few details.

So you may ask, what’s all the hype about the Brooklyn Bridge? Spanning the East River between Brooklyn and Manhattan, the Brooklyn Bridge was the world’s first steel-wire suspension bridge. It was called “a daring act of engineering” by The New York Times in 1983, 100 years after it was finally completed (it took 14 years to build.)

More than 150,000 people and 1,800 vehicles crossed the Brooklyn Bridge on the day it opened. At that time, the bridge was the only land passage between Brooklyn and Manhattan. Today, tens of thousands of people, vehicles, and bikes travel over the Brooklyn Bridge every single day. 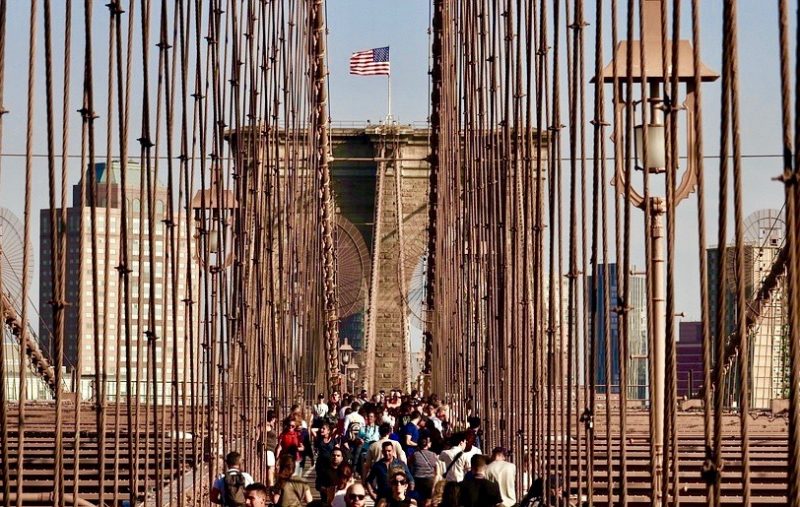 The bridge is an icon to people around the world. In the 19th century, immigration, innovation, and skyscraper architecture began to shape New York City’s future, and the construction of the Brooklyn Bridge was a fundamental factor that undeniably added to the city’s greatness. Deemed one of the world’s grandest, the bridge symbolizes New York’s image as a pioneer, connector, and global leader.

The Brooklyn Bridge represents the past, present, and future of New York in a way that neighboring bridges don’t. And in a city of hundreds of bridges, it’s also a beauty, isn’t it? Let’s get down to the nitty gritty to answer your questions about walking across the Brooklyn Bridge.

Walk from Brooklyn or Manhattan?

So the biggest question everyone asks, is: “Should I walk from the Manhattan side or the Brooklyn side?” I recommend both. They are very different experiences, so yes, I suggest walking across and then back. You don’t have to do both at the same time. You can mix these up if you like and even do them at different times. You can ride the subway from Brooklyn to Manhattan, walk across the bridge into Brooklyn, and vice versa.

If you’re feeling ambitious, walking across the Brooklyn Bridge from Manhattan early in the day gives you plenty of time to explore and spend time in neighborhoods like Dumbo and Brooklyn Heights.Then you can plan to walk back over the bridge into the city after dark. Walking either direction affords breathtaking views, but coming from Brooklyn into Manhattan at night is quite the thrill! 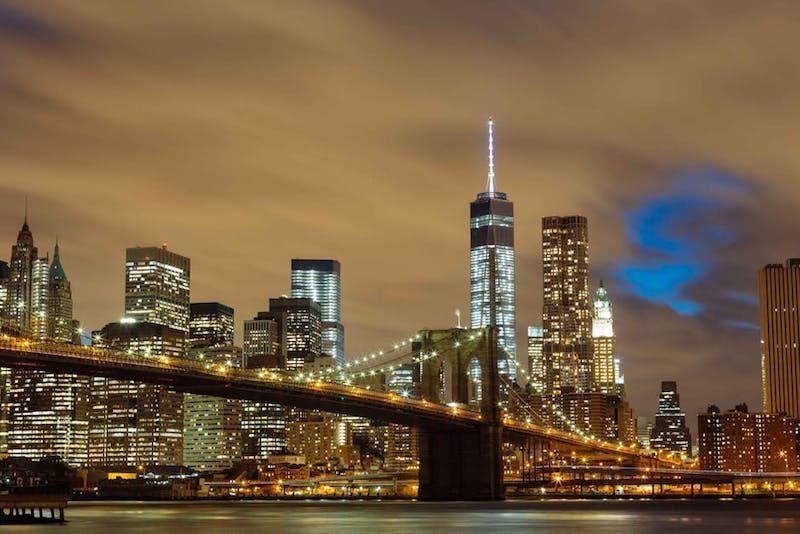 The entrance on the Manhattan side is easy to find. It’s across the street from the 4/5/6 Brooklyn Bridge/City Hall subway stop. You can’t miss it because you’ll see scores of people making their way to the entrance. In Brooklyn, the walkway begins at Tillary Street and Adams Street but might be a little tougher to spot. Below is a map showing the pedestrian entrance in Brooklyn. 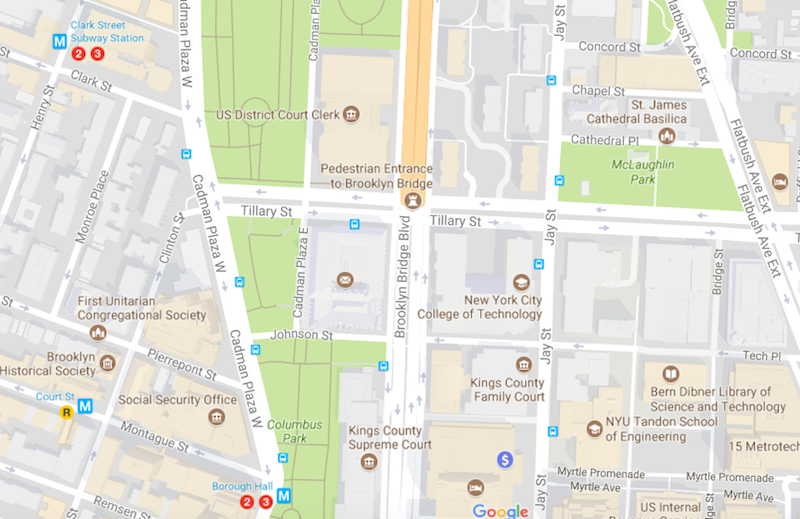 When to do the walk

Going early on weekends (before 9 or 10 a.m.) is probably the best time to avoid crowds. You can also go later in the evening like after 9 p.m. There will still be a lot of people after dark, and it’s perfectly safe. Avoid rush hours during the week because commuters use the bridge to go to and from work. If you want to go midweek, go before rush hour (like 6 a.m.), midday, or after the rush (8 p.m. or later).

How long it takes

The walk is 1.3 miles each way, so that distance should take 20-25 minutes if you were walking through the city and not making your way over a crowded bridge. That said, allow 30 minutes, and that’s no stopping. If you want to take a lot of photos, allow at least 45 minutes to cross. I promise – there will be plenty of terrific photo ops when you’re walking across the Brooklyn Bridge.

The most important rule 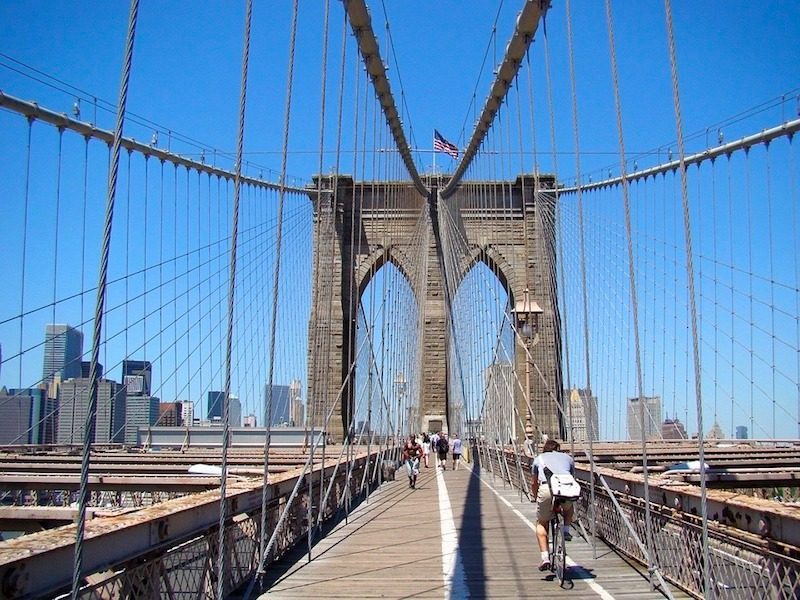 Ladies, leave the stilettos at home. Wear comfy walking shoes and not pumps. If you must wear fancy shoes, carry them in your city bag. 🙂

It can be hot in the summer, cool in the evenings, and downright frigid in the winter. Wear breathable fabrics in warm weather, but always have a sweater or scarf because the wind can make the air feel colder on the bridge. Dress in layers when it’s chilly. In case you get warm, you can remove something. Or cold, then you can put it back on. Wear sunscreen and sunglasses, or carry them with you. If the weather is sketchy and it might rain, wear a hooded waterproof jacket and shoes. That said, I recommend walking over on a clear day if at all possible, so you don’t miss out on those panoramic views.

Besides the obvious (wallet, identification, cash, and what I mentioned above,) remember to carry a bottle of water if it’s a warm day, and a snack in case your appetite calls. If you forget to pack food, you can always stop at Shake Shack for a burger. 🙂 And bringing a camera or smartphone is a no-brainer so that you can capture those awesome Brooklyn Bridge moments! 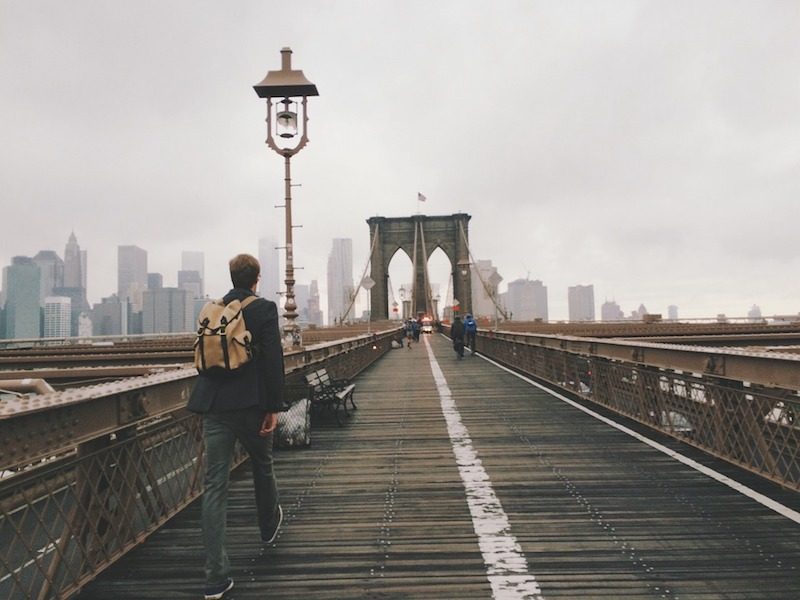 The bridge has contributed to our world-class city. Walking across the Brooklyn Bridge is a must at some point. If you’ve done it, tell us about your experience in the comments.

Another beautiful bridge is the 59th Street Bridge. Plus, if you want to explore a charming Brooklyn neighborhood, consider Cobble Hill.