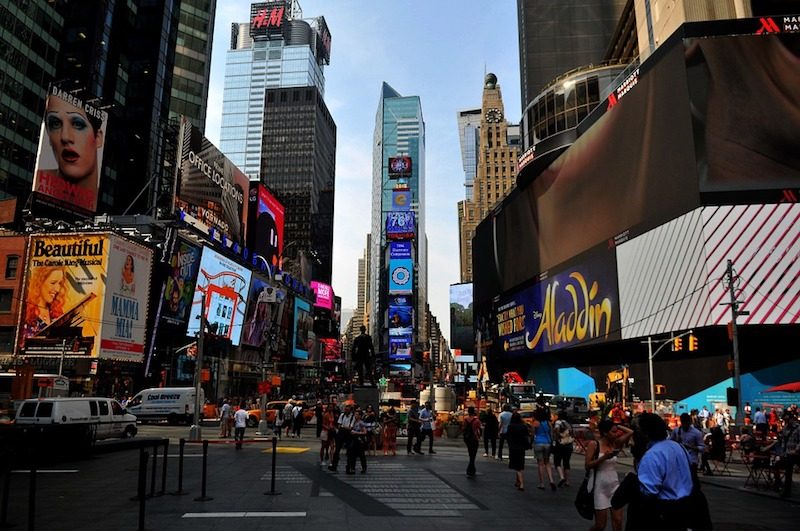 Over the years, I’ve purchased Broadway tickets from more than one source, but I usually try to avoid is Ticketmaster and Telecharge. (I’m not a fan of the websites – as they are slow or seem to crash! – or the fees.)  Yes, I do have an advantage because I live in New York City and I can hop the subway and head to the theater for seats. And, if I plan, I can play the lotteries online (I’ve won once), or wait outside the theater for a few hours. (I’ve won twice). But winning lotteries is hit or miss, and I usually get too wrapped up in my day to remember to enter the online lotteries, and I don’t have time (except on weekends) to park myself for a few hours in the Theater District. (I’ll cover more on that later.) That said, there are other ways to score seats to the theater – some work only if you’re in New York, but others work from any location. For the theater buffs out there – here are seven ways to buy Broadway tickets.

Go straight to the box office.

Obviously, this option only works if you’re in New York, but buying Broadway tickets directly at the theater is usually my first choice. I can view the seating chart and see which seats are available in different price ranges for a particular show date and time. I have purchased terrific seats in the balcony for less than $60. Depending on the size of the theater, balcony seats can be some of the best in the house.

The ticket window salespeople are usually pretty accommodating too, and they’ll tell you if it’s a good seat or a bad seat. I have found that 90% of the time, they’re opinions align with mine. And, you can take some online coupons to the box office to purchase tickets (more on that later). The fees at the box office are minimal too. Most prices should include a $2 facility fee, which goes toward the upkeep of these wonderfully old Broadway theaters, but you won’t pay any other crazy fees on top of the ticket price. Plus, I’m also a little old school, and I like walking out of a theater with my tickets in hand. 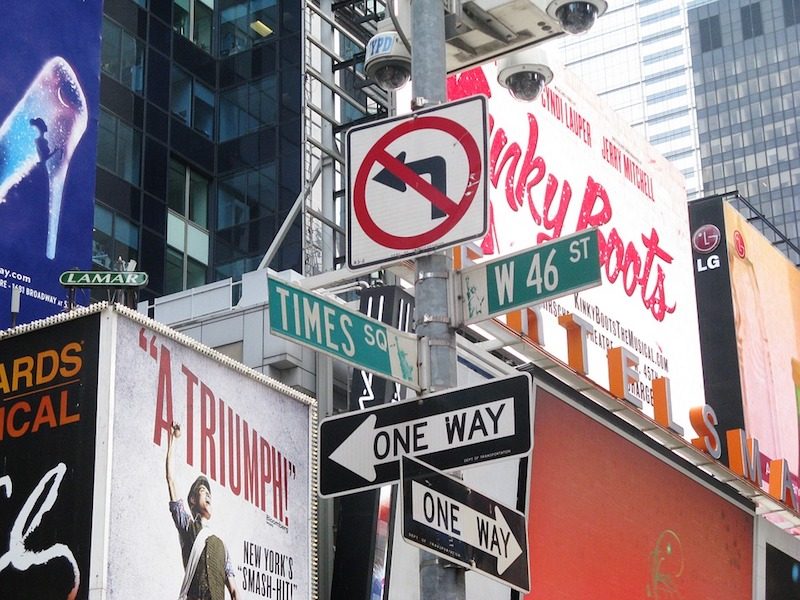 The Theater Development Fund provides a way to get Broadway, Off-Broadway and Off-Off-Broadway tickets at discounted prices ranging from $9 to $47 depending on the production. Not anyone can sign up to become a member of TDF – you have to qualify. If you’re a student, teacher, freelancer, government employee, retiree, you’ll make the cut.

The pro is that you can purchase up to nine theater tickets to some shows for not a lot of cash. Sometimes tickets are for the day of and sometimes a week or two out. The con is that you won’t know where your seats are until you pick up the tickets at the box office before the show. You could have great orchestra seats, or you could be in the nosebleeds. Sometimes, the website will tell you the section, such as, “Seating will be in the mezzanine.”  You can find out more about TDF on the site.

You’re probably familiar with the booth in Times Square (and the mobs of people in line), but did you know that there are other TKTS locations in the South Street Seaport, Lincoln Center, and Downtown Brooklyn? You no longer have to fight the crowds in Midtown to score discount tickets to a Broadway show. Discounted shows go up on the board the day of or the day before, and you wait in line to purchase tickets. You can download the TKTS app, or check the live status of the discounted shows on the website before making the trip to any of the locations.

For discounts, I like Broadway Box. You won’t find coupons for the top selling shows like Hamilton, Book of Mormon, or Wicked, but discounts are available for many other popular Broadway shows. You can save up to 50% on shows like Beautiful, On Your Feet!, and Chicago. (By the way, I recommend all three of these shows!)  If you’re in NYC, print your copy or save it on your smartphone and go to the box office window. Tell the salesperson about the discount offer and find out what seats are available. Pay less for your tickets. That’s it!

If you must buy tickets online, the website will take you to telecharge.com. The discounts should show automatically, but in case there’s a glitch, be sure to copy and paste the discount code before you purchase. 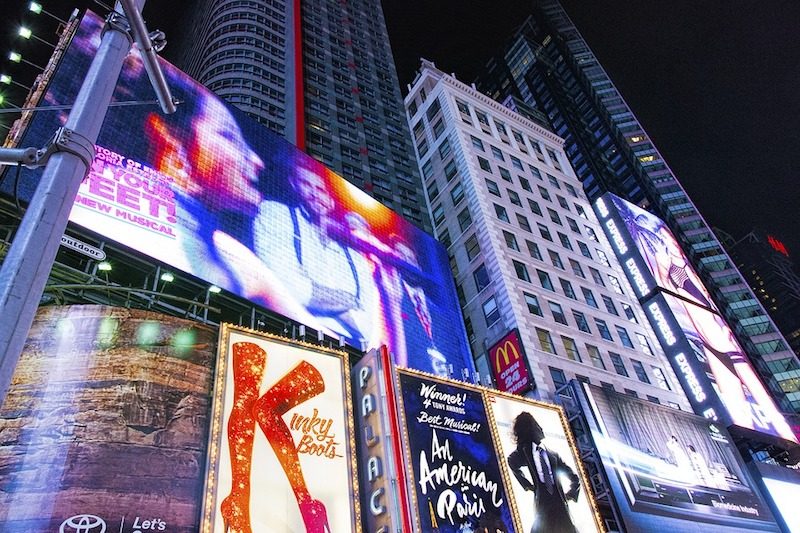 Purchase tickets to some of the hottest shows on NY Tix. You’ll see regular prices as well as discounts and lottery options. This site is user-friendly, but you’ll have to register as a member and pay a fee. Access costs $4 for 30 days, but there is no auto-renewal policy, so you won’t have to remember to go back in and cancel your membership. Note: If you try and purchase regular priced tickets on NY Tix, you’ll be redirected to Ticketmaster.

A terrific app for busy theater fans, TodayTix sells tickets to top Broadway shows. You’ll never have to worry about restricted view seats (can easily happen when you don’t know exactly where the seats are located), and the fee to purchase is $12.50 each. Many of the seats are discounted, so even with a fee, you are coming out ahead. You can buy up to 30 days in advance. Some tickets include their “concierge service” – a TodayTix agent will hand deliver your tickets starting at 30 minutes before showtime. Also, be on the lookout for lotteries that you can play through the TodayTix app.

Lotteries can be digital or in person, and you’ll save a ton of money on tickets. Hamilton lottery tickets are only $10! That said, thousands enter the lottery for a show like Hamilton, so the chances of winning are pretty slim. 🙁 Other shows have better odds.

Rush tickets are sold on the day of the show when the box office opens and on a first come first served basis, so be prepared to get there early for the most popular plays and musicals. (The most dedicated Broadway fans get there the night before and camp out.)

Standing room tickets can be as cheap as $27 and are sometimes available when the show is sold out.

Register for the online lotteries here. And I found an excellent guide from Playbill.com on the latest lottery, rush, and standing room policies for all the shows on Broadway – a must-read if you’re an avid theatergoer. 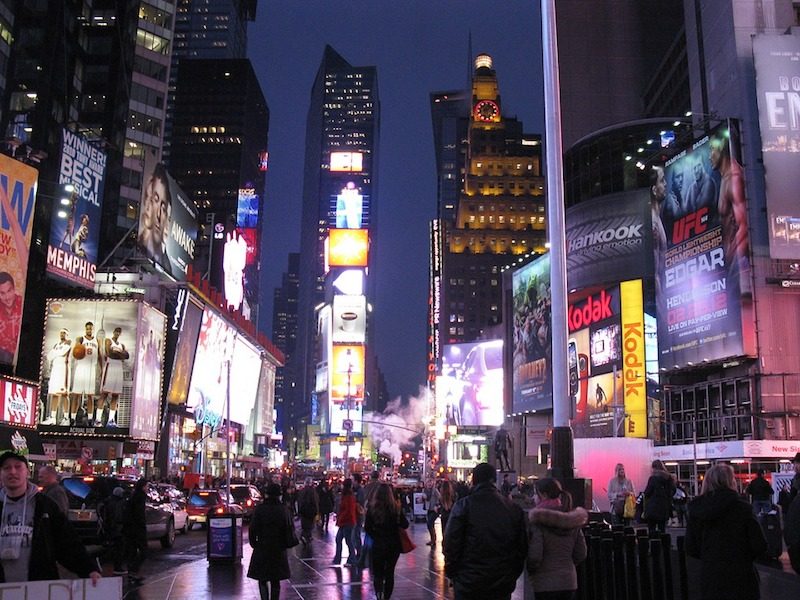 Do you know any other ways to Broadway tickets? Please share in the comments!

Also, before you attend your first show, read my guide to Broadway theater etiquette. And a Broadway bucket list!

« NYC Hotel Spotlight: Hotel Americano
Where To Find the Best Martini in NYC »